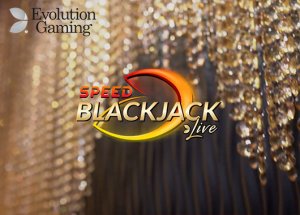 Evolution Gaming, one of the leading live games providers, is proud to announce the release of Speed Blackjack, a high-paced Live Blackjack variant.

Aside from the same rules as the regular Live Blackjack, Speed Blackjack brings an exciting new rule when it comes to the dealing order once it is time for the player to make their decision.

In the new feature, the Speed version, each player’s first two cards are dealt as they are normally dealt. Once the dealing of the first two cards is completed, all players are simultaneously offered the opportunity to Hit, Double Down or Split. The player who makes the decision first will get the next card first. This pattern of dealing cards goes on until all players have made all of their decisions and all required additional cards have been dealt to the players.

Representatives from Evolution Gaming say that during the last hundred years or so, players had to wait for the deciding player and they say that with their new Speed mode, players will make the decision when they are ready. They also say that this has no impact on the mathematical part of the game, only on the time spent playing.

“For the last hundred years or so, Blackjack players have made decisions from the dealer’s left to right, in order, and everyone has had to wait for the deciding player because that is how it’s always been done in casinos. We asked ourselves, ‘Why should players have to wait?’ With Speed Blackjack, players make their decision when they are ready and whoever is fastest gets the next hit card, giving the player more control. This has no impact on the maths of the game, it just reduces waiting time. Compared to our standard Live Blackjack game, Speed Blackjack is about 30–40% faster. I must say, it feels really good as a player because it is the game you know and love, but you have more control and there’s much less waiting time,” Todd Haushalter, Chief Product Officer at Evolution said.

The games provider, which recently signed a deal with Penn National, was founded in 2006 and it immediately had an impact on the European live dealer platforms. Evolution Gaming has been growing ever since and has signed deals with a lot of companies and made new partners including 888 Casino, Betclic, Betsson and a lot more prominent companies.

Its offering includes live casino games with real, professional dealers, made in the state-of-the-art studios in Latvia and Malta. All of its releases are available on desktop and mobile.